In the interest of sharing & caring I thought I would share with you all my goals for this round of the 12WBT and beyond. I know that over the last 15 months I have set lots of different goals some I have achieved and others I have not. This time around I have tried to make them realistic and achievable. Something I can build on as the year goes on.

How will I achieve it??
No exercise excuses. Follow the meal plan and NO EXTRA SNACKING!!!
Use water bottles & maybe add lemon when I'm struggling

3 Month Goal
79kg
No Diet Coke
Run out a full game of hockey without asking to come off (this doesn't mean not coming off it just means not putting my hand up because I can't breathe or speak to ask to come off. My team mates will understand this)

How will I achieve it??
being accountable!!! Blogging more.

Training hard and putting in the extra effort. Try different training other then just running.

6 Month Goal
75kg
Run my second half marathon in a better time & head space. No walking

How will I achieve it??
Training, training, training.
Not letting myself fall off the wagon. Stay committed to the programme and not let self doubt and good times throw me off course.

12 Month Goal
70kg
Run or work out 5 days a week NO EXCUSES
Be strong enough to go it alone.

How will I achieve it??
not too sure just yet I will get back to you one that.

These are all very similar to my goals I wrote on my fridge back in January. Just a little more specific and with a time frame attached. And as you can see they aren't all weight loss driven. There are a few other areas that I need to work on. The evil Diet Coke has made it's way comfortably back into my daily life.

Once this round starts I will blog every week with a recap of the week and go back to sharing my weekly weigh ins. You know how much I LOVE to share.

How do you set goals?? I am always open to suggestions of how others achieve and reach their goals and succeed.

I haven't posted for a while and basically that is because there hasn't been a whole to write about. Mostly just boring everyday stuff cooking, cleaning, washing, folding, school stuff & we started hockey training. Yippee 2 hrs a week where I HAVE to exercise & I get to get out of the house!!!

Life was pretty uneventful until today. I did my first 10k Fun Run today. To give you a bit of brackground. I only got back into running at the end of January after a few months of not much. Then to make me actually have something to train for I signed up for my first official fun run.

A few weeks into my 'training' I had a small tear in my hamstring. I was told to rest it for a week. NO RUNNING! So what did I do?? Played Tennis.......cos you don't run when you play tennis right?!?!? Especially when it is Women's Double Championships. I lasted right until our last game when I felt it 'go'. So that meant 3 weeks of no running. One day I am sure I will listen...............well maybe.

Fast forward to today and I found myself standing at the starting line with 2500 other people. I was in the last starting group feeling very lonely and out of place but keen to get going. 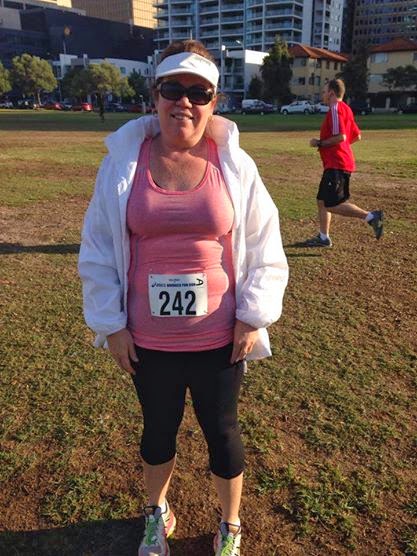 All ready to run!

Off I head feeling confident and scared at the same time. Before we hit the first km mark I have realised 2 things. 1. I need to wee & 2. I don't think that I will ever get used to running with this many people.

First things first I need to wee!! And my hockey girls know when I have to go I HAVE to go. I did stupidly stop to have a drink at the first water station and nearly choked on it. But that was not the problem it was the cup of tea I had before I left the house that was making every tree or bush look appealing. I was starting to get desperate and as I had never run this course before I had no idea how long it was until I would get some relief. Bit different to running on the farm where you don't even need a tree or bush let alone and actually toilet.

Finally after about 3 and a bit km there it was!! I have never been so happy to see a toilet!!!

Problem 2.............People.............fast, slow, talking, groups taking up the whole path etc etc. I spent the first 3km wondering what the hell was going on. I over took a few people then would find someone to sit behind thinking "yep this is a good pace" then they would slow down or speed up. Then I would try to overtake people without getting in others way or cutting in infront of the person I was overtaking. OMG when did running get so hard and require so much thinking????

The good news is that once I had done my wee I didn't have to worry too much as the crowd had thinned out. Then the next 7km was a case of me passing people then them passing me then me passing them & them passing me etc etc etc. I ran up until 6km (minus the wee break) from then on it was walking and running.More running then walking. I tried to run the whole of the last km but it was hard work!! It didn't help seeing people who had obviously finished a lot earlier leaving. However some of them were great and offering support & encouragement.

The best part was about 10 meters from the finish line I spotted my hubby and little girl. Was so nice to see them and have someone to high five before I crossed the finish line. I looked up as I crossed the line and the clock said 1hr 15min. (my official time will be a little under that as we crossed the start line a few minutes after the clock started.)  My goal was to be under 1hr 20min. So I was stoked. 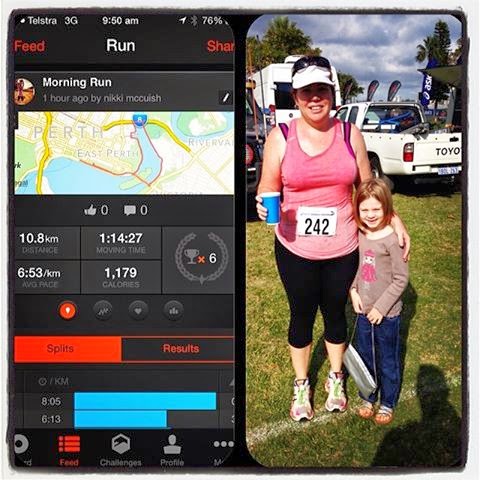 My shirt was dripping with sweat & I was exhausted but it was all worth it!

Now I have about 6 weeks to get ready for my next fun run. The HBF Run for a Reason. It's a 12km run which I am hoping to do in under the 1hr 15min I did today. However that won't be my biggest challenge for that run. My biggest challenge will be running through the Graham Farmer Freeway Tunnell!!! I almost hyperventilate just driving through it. I have no idea how I am going to run through it other then it will be the fastest part of my run!!! Have I mentioned that I am VERY Claustrophobic.

Things to remember for next time:
No cups of tea before hand
Wee before you start no matter how long the line up is
Stop to drink unless you want to choke
Find a way to not chafe under the arms

Also one last thing to remember before doing a big run.............If you get your hair coloured the day before don't wear a white hat. And it was a borrowed hat. Ooops!!
Posted by Becoming Nikki at 04:48 1 comment: